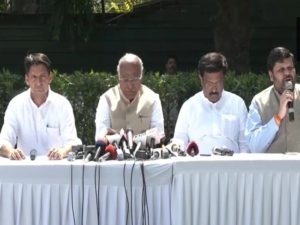 No words can describe the plight of the grand old Congress party. The efforts made by the leaders are not working for the party. Despite carrying a rich heritage, the party is not in a good shape. To bring back the lost glory, former party chief Rahul Gandhi started the Bharat Jodo Yatra.

Forget about bringing the lost glory, since the yatra was started, the party has been facing setbacks at regular intervals. A few MLAs left the party and joined the saffron party Bharatiya Janata Party.

Now the party suffered another big blow with three leaders stepping down from the party. Deepender Hooda, Syed Naseer Hussain, and Gourav Vallabh announced their resignations, and letters saying the same were sent to interim Congress chief Sonia Gandhi.

Speaking to the media, the Congress leaders said that Congress is following the one person-one post rule as they cannot campaign for the veteran Congress leader holding a position in the party, so they resigned.

All eyes are now on the Congress chief polls as a non-Gandhi family is running the polls after a long time. The elections are slated to be held on the 17th of next month and the results will be out on the 19th. The Congress party already issued ID cards for the delegates for the polls.