Advertisement
Home News Film News Actor Satyadev Is Up For A Big Challenge For GodFather? 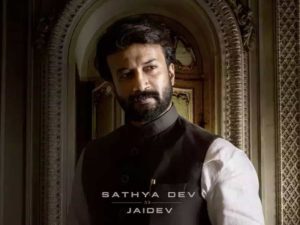 The undisputed king of Tollywood Megastar Chiranjeevi, who could not reach the expectations with his last outing Acharya is now awaiting the release of his upcoming film GodFather which will hit the theatres on the eve of the Dasara festival. In just three days, the Megastar starrer will arrive at the theatres.

Ahead of the release, the focus is on actor Satyadev who is expected to reprise the Bobby role from the original played by Vivek Oberoi. This is the biggest film in his career and a big challenge as an actor.

Vivek Oberoi shined in the role of Bobby in the original Lucifer. As the actor appeared in baddie roles earlier. Vivek Oberoi brought his best as the villain opposite someone like Mohanlal. We cannot imagine others in Bobby’s character, that’s how Vivek Oberoi impressed the audience.

The same is not the case with actor Satyadev. He never played a baddie role that too a full-fledged one. Vivek Oberoi set a benchmark for the role and he has to match the benchmark to show the industry what his capabilities are as an actor.

Satyadev is a terrific actor and he proved that many times. But playing villain characters is something new to the actor. If he can shine in the role, we might see such opportunities coming to Satyadev. It’s in the hands of Satyadev and we have to wait and see how he can leave a good impression in the baddie role.

In Lucifer, Vivek Oberoi faced just Mohanlal and in GodFather, the makers brought Salman Khan in a cameo role and the face-off between Satyadev and two Superstars is going to be interesting. In a few days, we will know if Satyadev can shine in the big test with GodFather.