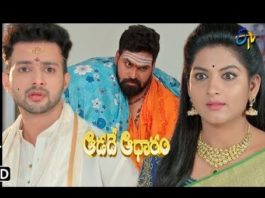 Serial Plot:
Adade Adharam is a daily serial on ETV, sensitively highlights the role of woman in oneis life. She is the cause and the reason of existence, and the ultimate refuge. Vikas, a selfish person who sets his eyes upon rich Renuka, incites his friend Sagar into kidnapping her, who mistakenly abducts Amrita. Next day, she returns to her hostel. Spurned by society and even her family for having spent a night out of her hostel, Amirita unwittingly becomes a victim of fate, and so begins a tale of misery and woe.
How she tackles a string of insurmountable problems and fights fate is the drama that unfolds. Adivi Sesh’s sensational blockbuster HIT 2 is rocking the theaters. Adivi Sesh and the team delivered another solid thriller, and their hard work is getting paid off with accolades and appreciation from audience to celebrities.

In the video, Sailesh called Venkatesh the OG Super police DGP Ramachandran and the whole team is on cloud nine with the words from Venky Mama. The second instalment from Sailesh Kolanu’s ‘HITverse’ has been directed by Sailesh Kolanu.

The film had Meenakshi Chaudhary as the female lead. In ‘HIT 2’, Sesh essays a lazy, laidback cop on the trail of a criminal. The film, which hit the screens on December 2, is due for Hindi release shortly.