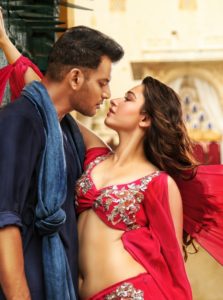 Riding high with all the appreciation she received for her looks and performance in Chiranjeevi’s Sye Raa, Tamanna is set to provide glamour treat in Vishal’s Action.

Besides enacting some daredevil stunts for the Sunder C directorial, Tamanna also oozed enough of oomph in the film.

Recently released intense trailer of the film got remarkable response from action movie lovers. Tamanna was seen donning bikini in teaser as well as trailer.

Well, here is the new poster from Action and Tamanna draped in red attire looks extremely hot and seductive. The gaze into Vishal’s eyes would have taken him to a trip to heaven.

Her standing position gives a fantastic view of her ravishing curves.

Warangal Srinu is releasing Action in Telugu states. The film will be hitting the screens in a couple of days along with the Tamil version.