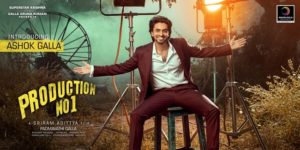 The first look poster of Mahesh Babu’s nephew, Ashok Galla, from his debut film is out and he looks striking.

Ashok is seen in simple casual attire. The vintage car he is leaning on might be some sort of indication of the film’s theme and set-up.

This as-yet-untitled project is being directed by Sriram Adittya and will be bankrolled by Padmavathi Galla.

The film is set to be launched in a grand manner tomorrow and the makers have hit the right chord by releasing a captivating first look.