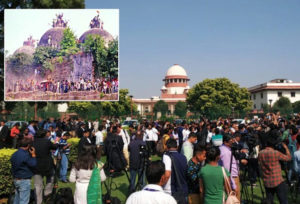 Prime Minister Narendra Modi has welcomed and respected the Supreme Court verdict on Ayodhya dispute, saying that the decision has been taken ‘amicably’ and will ‘further strengthen’ confidence in the judicial system.

Modi, while asking people to strengthen their Rashtra bhakti, said ‘the nation’s apex court’s verdict in Ayodhya case today must not be seen as either victory or loss. Does not matter if you are a Ram Bhakt or Rahim Bhakt, it’s time to strengthen Bharat bhakti’ on his Twitter. He requested every Indian to maintain peace, harmony and unity.

He also said, the decision of the Supreme Court is important and followed the legal process in resolving a dispute. ‘Each side was given enough time and opportunity to present its arguments. The temple of justice resolved the decades-old case amicably,’ Modi said.

A five-judge constitutional bench of the Supreme Court has delivered its verdict today and in a unanimous decision, the court directed that the disputed land is to be handed over to a Central Government trust to construct a temple and the Muslim party to be given a 5 acre land in Ayodhya for the construction of Mosque.

On the other hand, Pakistan Foreign Minister Shah Mahmood Qureshi objected the timing of the Ayodhya verdict, which has coincided with the inauguration of the Kartarpur corridor. He said he was ‘deeply saddened’ at the ‘insensitivity’ shown at such a festive moment.

(Kartarpur Corridor is a border corridor between Pakistan and India and Sikh religious devotees travel from India to visit the Gurdwara in Kartarpur, 4.7 kilometres from the Pakistan-India border, without a visa).

Congress leader Rahul Gandhi tweeted that the verdict has come and now Indians have to maintain brotherhood, love and trust among them. Also, Rajinikanth reacted by saying that ‘everyone should respect the SC judgement for the development and progress of the country.

Irrespective of one’s religion, everyone should come together and work towards it.’ Many Bollywood celebrities like Madhur Bhandarkar, Koena Mitra, Huma Qureshi, Kangana Ranaut reacted to the verdict and respected the judgement.