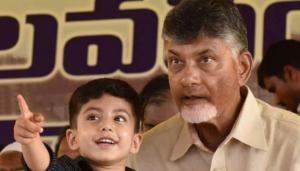 YSRCP MP Vijayasai Reddy took potshots at TDP chief Chandrababu Naidu and Nara Lokesh as the YSRCP government decided to introduce English medium in all the government schools. Over this the TDP is crying foul and criticized the YSRCP for giving second priority for Telugu language.

Reacting on Lokesh’s comments on Twitter, Vijayasai replied, “Will you (Lokesh) put your kid in Telugu medium school. You want the poor and backward children to study only in Telugu medium as you don’t want them to grow and pursue international studies. Can Chandrababu and Lokesh make Devansh study in a Telugu medium?”

Vijayasai reminded the comments once made by Chandrababu who as CM wanted the schools to teach Chinese and Japanese language to the children. “Lokesh should take a note of his father’s comments. In changing words, Lokesh is taking a leap than his father,” tweeted the YSRCP Rajya Sabha MP.

Earlier Lokesh shared screenshots of Sakshi website articles in which Jagan’s media criticized the previous TDP government for introducing English medium in government schools back in 2017.

Regardless of the politicians opinion, many like Jayaprakash Narayan and professor Kanche Illaiah have batted for English medium in sarkari schools.