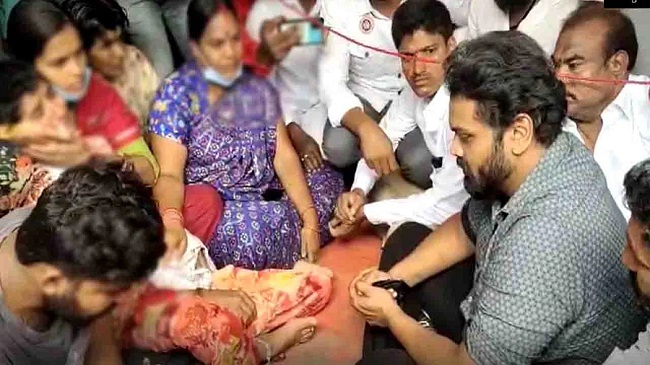 A heinous crime took place in Singareni Colony in Saidabad in Hyderabad earlier last week where a 6-year-old girl was raped and killed by the accused allegedly. The incident has created a tense situation in the neighborhood with the family members and locals calling for a protest demanding severe punishment for the accused.

However, the issue didn’t get much coverage in the media with the media outlets focusing on Sai Dharam Tej’s accident issue. The netizens have also expressed their anger on the issue of not getting the required coverage.

Tollywood actor Manchu Manoj who met the kin of the victim expressed the same. He said, he is with the family and he is supporting the fight of the family to get justice.

Manchu Manoj said he was out of words to console the parents of the victim. When the mother of the girl asked me for help, I couldn’t say anything. The accused is still on a run and we should be ashamed of the incident, he said.

With a teary eye, the actor said, it’s said that the media outlets have focused on Sai Dharam Tej’s issue while batting a blind eye towards the issue. These kinds of issues would be highlighted, he maintained.

He had demanded that the accused should be slapped with severe punishment. Manchu Manoj said he would help the family of the victim in a possible way.

The heinous crime took place on Thursday. The victim’s neighbor Raju is said to be the accused in the case. The cops launched a search operation for the accused. A case under the IPC sections and Protection of Children from Sexual Offences (POCSO) Act was registered by the cops.