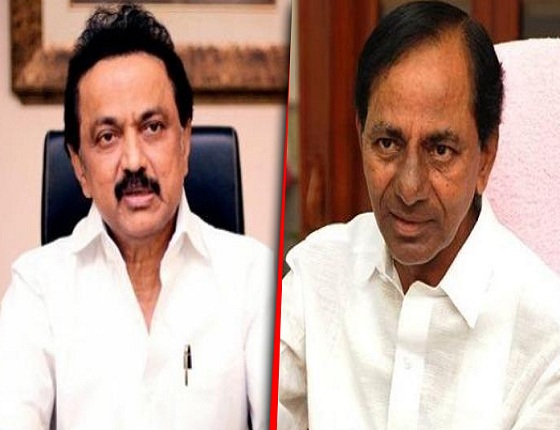 Telangana CM KCR who embarked his south states tour for Federal Front has received unexpected twists. As part of it, the TRS supremo first met Kerala counterpart Piranayi Vijayan with a prior appointment and discussed about national politics for nearly ninety minutes. With partial positive things, KCR landed in Tamil Nadu but his plans are not going like how he intended them to be. DMK chief Stalin is yet to confirm his appointment and with no other option, KCR is waiting silently.

With the slogan of non-BJP and non-Congress front, KCR had met Odisha CM Naveen Patniak, West Bengal CM Mamata Banerjee and others before the announcement of elections. He also discussed his ideas. He went on record to say that he will be once again touring states after the polls to gather the support for Federal Front. As part of it, he is visiting states which are done with the voting process and that’s how he started with south states. TRS party sources have indicated that KCR will meet Stalin on May 13th.

With Stalin busy with election campaign, he did not give an appointment and is also not sure whether he will allot time or not. On one hand KCR is waiting for Stalin appointment and in this gap, he is filling it with visiting the famous temples. On the first day of his TN visit, KCR paid homage to former President Abdul Kalam and had a look of the Kalam museum. On the second day, the TRS chief went to Rameshwaram, Dhanushkodi, Rama Sethu and Panchamukhi Hanuman temples. KCR was accompanied by his wife, son KTR, MP Santosh, grandson Himanshu and others.

But why is KCR so desperate to meet Stalin in spite of the DMK chief being super busy. This has become a topic of discussion in the political circles. Political experts are even surprised by KCR’s patience to get Stalin’s appointment.