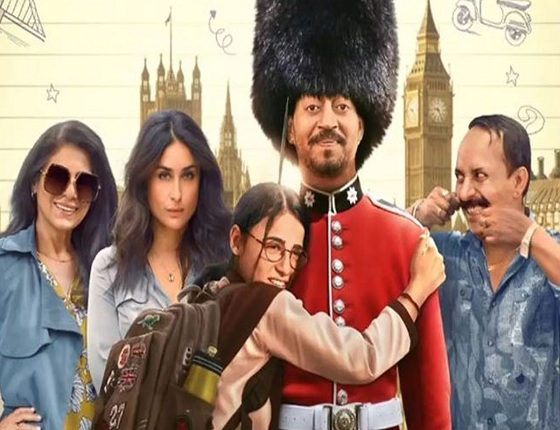 In the year 2017, the film ‘Hindi Medium’ was a sensation. Actor Irrfan Khan played the role of a rich businessman who wants his daughter to be studied in a big English medium school but has poor language skills. Taking a queue from the plot, now arrives ‘Angrezi Medium’ and it’s Irrfan again in a leading role and the trailer is out.

Irrfan is a proud father of his daughter who tops the college and at the felicitation ceremony, he fumbles and evokes laughter. Then the trailer gets into the actual plot. Irrfan’s daughter wants to purse higher studies in London but it would cost Rs 1 crore. How can a small time businessman pay Rs 1 crore as college fee? Irrfan takes an easy route and goes to London to marry a woman. Will Irrfan get an admission for daughter in the top college, she wants to study forms rest of the plot.

Directed by Homi Adajania, the trailer is entertaining and engaging. Irrfan nails it with his impeccable performance and his comedy timing is better than before.The film also stars Kareena Kapoor Khan and Radhika Mandan in the lead roles. Produced by Maddock Films, ‘Angrezi Medium’ is releasing on March 20th, 2020.