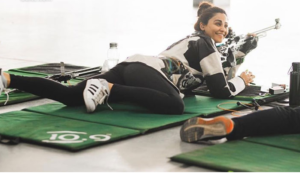 The 35-year-old Daisy Shah, who worked in movies like Jai Ho, Hate Story 3 and Race 3, has previously worked as an assistant choreographer for famous dance master Ganesh Acharya. Later, she appeared in quite a few movies and gained popularity with her good looks. Now, the actress has earned another achievement into her kitty.

Daisy has received a shooting licence from the National Rifle Association of India. The actress opened up that she is passionate about shooting and is keen on becoming a professional shooter. She has also reportedly begun learning rifle shooting in 2017.

Moreover, Salman Khan, who is a good friend of Daisy Shah, has congratulated her for her latest achievement via social media. The superstar said that he is very happy to hear the news and Instagrammed Daisy’s picture of holding a rifle. He captioned, “Congrats on becoming aspiring shot yet again! Now thoda medal ko target karo.”

The picture shows holding a practising rifle in her hands. Currently, Daisy is busy with a Gujarati film and earlier, she has worked in Hindi and Malayalam films. Salman Khan, who always introduces newcomers in his film, has also introduced Daisy as a leading actress in his 2014 film, Jai Ho. Daisy Shah, achieving a rare feat, is indeed a proud moment for her friend Salman, Bollywood fraternity and the whole nation.