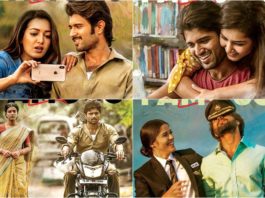 World Famous Lover is another love story from Vijay Deverakonda where he is seen in various getups including the famous Arjun Reddy avatar.

Gautham (Vijay) is a struggling writer who is madly in love with Yamini (Rashi). She is fed up of with him sitting idle all the time and breaks up with him. Then Gautham writes two stories and as he writes we gets to see him enact those characters that he is writing.

Vijay Deverakonda is a fine actor who is good at showing the pain of a heartbroken lover. He once again gets to play a character that is reminiscent of Arjun Reddy. There’s nothing new that we see of him in this avatar, but his performance as Seenayya, a miner is the best thing about the film. Rashi Khanna gets to play a very emotional character and she did fine. Aishwarya Rajesh is good as the loving wife of Seenayya. Catherine appears as a lady boss and Izabelle is okay in the Paris episode. Priyadarshi plays a stock character as hero’s close buddy.

Kranthi Madhav’s story idea is good. A writer imaging himself in the stories he writes while he is going through a breakup is a fine idea. But the film falls flat because of weak execution. There is deliberate attempt to show Vijay Deverakonda in Arjun Reddy mode that really doesn’t fit into this story and scenario. Even the imaginary stories lacked any sort of imagination.

Gopi Sundar’s music is a dampener. Not even single song is worth remembering. Background score and cinematography are good, though. Production values are rich. The film is shot in rich and eye catching locations.

World Famous Lover has a nice plot that would have sounded promising as a storyline. However, director Kranthi Madhav makes a mess of it by narrating it in an old fashioned way. While the actual story and characters seems to be very advanced, the characters in the imaginary stories are outdated. The film starts off on a promising note, but soon slips into regular pattern without any surprise elements. Seenayya characterization and Aishwarya’s performance as his wife is the best part of the film. Vijay really owned the screen as Seenayya, which is a bit different from the usual characters he plays.

However, the storyline in Illandu episode is not novel. One would easily guess where it is going and there are some unaddressed issues like Seenayya neglecting his son. But he cares for his co-workers kids at the same time. Gautham-Yamini story is told in parts, but there is not a worthy moment in their whole story. The story shifts to Paris where another silliest love story begins. It is yet another lackluster story that doesn’t even have charming characters like we saw in Illandu story.

Climax is a rip off of Arjun Reddy story and the director didn’t even had the guts to end it on a tragic note. It drags on and on until we are bored to death. Even the music and songs don’t come to our rescue. It is high time Vijay reinvents himself and come out of Arjun Reddy mode before his diehard fans gets bored of seeing the same thing again and again. World Famous Lover may get openings due to Vijay’s craze, but it doesn’t have anything that can help it become a box office success.