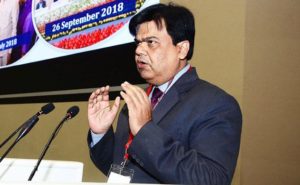 Now, it appears Praveen Prakash wants to get into news for right reasons.

On Friday, he wrote a letter to his salary drawing and disbursing officer and assistant secretary in the General Administration Ch Rama Rao, asked him not to pay him salary till all the outsourced Class III and IV employees get their salaries for the month.

Apparently, the IAS officer has given the impression that he is feeling guilty of taking salary when the outsourced staff are suffering due to non-payment of salaries for months.

Most of the times, the outsourced staff are denied payments due to delay in preparation of bills and other reasons.

Praveen Prakash said the Class-3 and Class-4 employees are the real arms of the government.

“It is these employees who translate the vision of government at field level. Incidentally, most of them are hired through contract or through outsourcing method. It has been observed that the payment of salary of these contract/ outsourced employees is delayed substantially”, he said in the letter.

He said the basic human needs were very similar and the general level of savings of Class-3 & 4 employees are lesser than that of Class-1 & 2 employees.

“So, the necessity to pay Class-3 & 4 employees in the first week of the month is higher than Class 1 & 2 officers who can afford some delay in payment of salary,” he said.