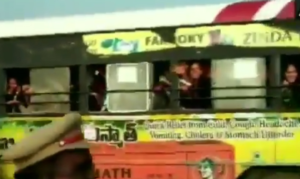 The encounter of Disha’s rape and murder is a nation-wide topic now. A majority of the public are hailing the Telangana police for killing the four accused.

In a viral video, college going students in a bus shouted in joy as they got to know that the rapists were killed. Right after Disha’s brutal rape, there was anguish especially in the young women who questioned the government and police about their safety. After the accused were arrested, women staged a protest at Shadnagar police station in large number.

But this video of the girls shouting in joy is just pleasing to see and will definitely make you roll tears from eyes. That’s the reality.