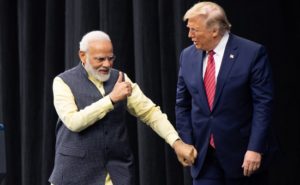 Usually the Presidents and Prime Minister of superpowers like USA, UK or any other strong nations never directly give a threat to the heads of dependent countries like India. But after a reporter insisted on him what they are gonna going to do with India if Hydrochloroquine is not exported to them, US President Donald Trump stated that they will retaliate.

But it is Trump’s unique characteristics like unexpected antics, jokes and eccentric behaviour which none of the previous US presidents had, that are more popular than his presidency alone.

After coming to know that Prime Minister Modi has lifted the ban on HCQ exports, and the USA will be soon going to see the first batch of the medicine along with Paracetamol exported to them, Trump hailed Modi again.

As the first shipment of more than 29 million doses of HCQ was on its way from factories in Gujarat to the United States, Trump said, “I spoke to Modi if he would release it, he was great and really good”, while speaking to Fox News last night, as he got elated that India is sending the drug.

Well, only Trump could do that, could give a threat if he’s not give what he asked for and could hail them back if his desires are fulfilled.