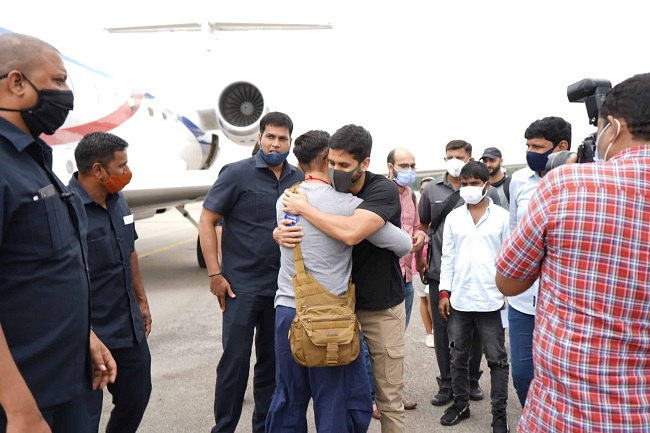 Naga Chaitanyaâ€™s upcoming film Love Story is carrying a lot of positive buzz. The recently released trailer had intensified the buzz. As part of the promotional activities, the team had made arrangements for unplugged. The event will be held on Saturday at 5 PM.

The makers have managed to rope in two big personalities to grace the unplugged event. Bollywood Superstar Aamir Khan, known as Mr. Perfectionist will attend the event for which the star had landed in Hyderabad today. Aamir Khan was welcomed by the makers.

Naga Chaitanya was also present at the airport when the makers of Love Story had welcomed Aamir Khan. The pictures of Chai welcoming and hugging Aamir Khan went viral on social media platforms instantly.

After reaching Hyderabad, Aamir Khan was presented with a sapling and he took part in the Green India Challenge started by TRS Rajya Sabha member Santosh Kumar. He had planted the sapling. Speaking to the media, Aamir Khan showered praises on TRS member for starting such a good initiative.

It is also said that the undisputed king of Tollywood Megastar Chiranjeevi will also grace the event. It will be a treat for Akkineni fans to see two big Superstars in a single frame for the event.

Love Story is carrying high expectations given the fact that it’s the crazy combination of Sekhar Kammula and Naga Chaitanya and Sai Pallavi. The movie will hit the theatres on the 24th of this month.