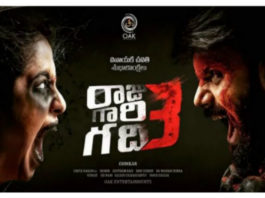 Ohmkar’s Raju Gari Gadhi 2 ended up as an average fare despite having big names like Nagarjuna and Samantha in the star cast. In the third installment of RGG, director and producer Ohmkar didn’t spend money on stars. He bought the remake rights of Dhilluku Duddu 2 and tried to repeat the formula that clicked for Raju Gari Gadhi.

A mysterious power is guarding Maya (Aivka Gor), a physiotherapist. The mysterious power doesn’t allow any man to come near her. But an auto driver Ashwin (Ashwin Babu) tries to impress her against all odds. How does he overcome the ghosts to marry her is what the rest of the film is about.

Ashwin Babu tries to woo masses in a film that doesn’t give much scope for any heroics. He hasn’t shown much improvement in terms of acting but has gained confidence in front of the camera. Avika Gor has little to do except to look cute and appear worried at times. Ali got a full length role as Ashwin’s sidekick and he is okay. Urvashi and Ajay Ghosh bring few laughs here and there. Dhanraj’s character is repeated from the first part. Brahmaji gets a couple of spooky moments to tickle.

Ohmkar is refusing to put down this horror comedy franchise aside and work on other scripts. He has made this one a decent budget compared to the first edition. It is technically slick compared RGG, but the quality of content and humor is lowbrow this time.

Songs are absolutely not needed, but there are one too many just to showcase Ashwin’s dancing skills. Background score is loud and predictable. Cinematography by Chota is the highlight. Special effects are okay in some scenes. Dialogues by Sai Madhav Burra are pretty standard. Production values are decent.

Horror comedies have become too routine now that audience are not thronging to the theaters like they used to. However, Kanchana franchise is still minting money at the box office. This is Ohmkar’s attempt at milking out of his own mediocre horror franchise Raju Gari Gadhi. Basic plot of the film is taken from Tamil hit Dhilluku Duddu 2 and entire first half is dedicated to showcase Ashwin as a mass hero. Besides sporting a thick beard, driving an auto rickshaw and wearing lungis, Ashwin fails to make any impression in this mass avatar. A lot of time is wasted on his buildup shots and songs that could have been spent on comedy sequences which could have served its purpose.

Second half of the film is where the real fun starts. But it all gets too predictable and unfunny as the scenes get repetitive with ghosts screaming in the face and people thrown in to the air. A couple of moments do click in this so called horror comedy mess, but that cannot make this one a recommendable film. The director and writers have gone out of ideas to create humor that they resort to showing cheap scenes that are of low quality even for Raju gari Gadhi standards. Entire second half is a single marathon sequence where the main characters tread through a haunted bungalow in the dark with ghosts lurking in every corner.

Climax is hurried and lacks the punch. Only saving grace is its runtime, which is just over two hours. Ohmkar made Rajugari Gadhi on a shoestring budget, but he roped in big names for this one behind the screen. Chota behind the camera does a nice job to give it a visual appeal. Seasoned comedians like Ali, Brahmaji and Urvashi make some mediocre scenes work. Raju Gari Gadhi 3 is a comedy that is targeted at the audience that liked the original. Even they would agree that the humor is of low standard in this one. On a whole, this third room of Raju Garu is not worth visiting unless you could laugh at cheap jokes.