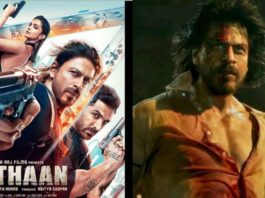 Once the undisputed king of Bollywood, Shah Rukh Khan’s career was in serious trouble after a string of box office bombs. After four years of self-reflection, he re-emerged as “Pathaan.” Here we have the movie Pathaan.

Let’s see if Shah Rukh Khan can work his magic once more.

Story:
The ISI of Pakistan has threatened to attack India using a private terrorist organisation in response to the Indian government’s decision to repeal article 370.

The head of the ISI gets in touch with a renegade Indian agent named Jim (John Abraham), who plans to exact revenge on India.

Many years ago, when Jim’s wife was being held hostage by terrorists, he became bitter toward India because our government did nothing to rescue her.

As part of his plan to create a deadly virus, Jim kidnaps an Indian scientist in Dubai and forces him to work for him. India’s top secret agent, Pathaan (Shah Rukh Khan), has been tasked with taking down Jim.

In this case, Pathaan is aided by Rubina, a defected ISI agent (Deepika Padukone). But is he able to rely on Rubina’s honesty and integrity?

Artistes’ Performances:
Shah Rukh Khan sheds his romantic image and transforms into an action star. Shah Rukh Khan, with his eight-pack abs, appears to be in shape for such roles. His charismatic screen presence and dialogue delivery are the most appealing aspects of the film. He is extremely agile when performing action stunts. Another highlight is his bonding with Salman Khan, who appears briefly in the film.

Deepika Padukone excels at both the glamour show and the action stunts. She does a lot of action stunts with Shah Rukh Khan and has a meaty role.

John Abrahm is a compelling rogue agent. He has charismatic presence. Dimple Kapadia is cast as a boss.

Technical Excellence:
“Pathaan” is a true spy thriller with globe-trotting action. The locations are breathtaking. The visual setting is lavish and grand. The ice stunts are reminiscent of a James Bond film. However, the stunts are truly large-scale, visioned, and executed. We see jet planes flying through the air and helicopter battles.

The cinematography is excellent and fits the scale of the film. The visual effects work is adequate. Background music is ideal. The film’s pacing should have been racy.

Analysis
There’s a title card at the beginning of “Pathaan” that explains the movie is connected to the YRF spyverse. Both “Ek Tha Tiger” and “Tiger Zinda Hai” were produced by the same studio. This latest instalment stars Shah Rukh Khan as Agent Pathaan in yet another spy film. In this spy universe, we also get a visit from agent Tiger.

Everything about “Pathaan,” from the setting to the plot to the production, is typical of a spy thriller. The plot doesn’t amount to much. But director Siddharth Anand presents it so that it can win over both general moviegoers and Shah Rukh Khan fans.

The first half of the film is largely spent on establishing the hero’s mission, introducing the villain, and Deepika Padukone – SRK’s romance. After the interval, the movie gets going. An explosive “Pathaan meets Tiger” moment kicks off the action after the intermission. The on-screen chemistry between Salman Khan and Shah Rukh Khan makes for a fun episode.

The second half features a plethora of exciting and visually stunning action sequences. The lack of logic and reason is disappointing, but the thrills are well worth the price.

Let’s be honest: the film strictly adheres to the norms of the spy thriller genre and its established formula. It’s just too taxing to watch some of these stunts. Also, the story’s attempt at an emotional appeal falls flat. There isn’t much in the film to make you feel patriotic, either. But the charisma of Shah Rukh Khan makes us believe in the unbelievable.

Star power and action are Pathaan’s are main assets. The film’s targeted viewers are those who enjoy action movies in general. So it’ll be effective for them. To others, however, it will just be another high-budgeted slick action movie.

All in all, watch “Pathaan” for Shah Rukh Khan’s charm and a few stunning moments, but don’t expect much from it. It’s neither great nor a total letdown. However, in the theatre, the film provides a decent amount of enjoyable entertainment.