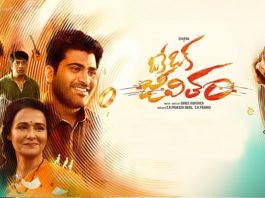 Shwarwanand is struggling to give a hit for the past few years. All his films are either failing commercially or critically. He has arrived now with ‘Oke Oka Jeevitham’ which is an emotional science fiction film. This bilingual film made in Telugu and Tamil has caught the public’s attention with its promos and songs. Let us dive into the review straightaway to find if Sharwa got his hit this time or not.

Aadi (Sharwanand) is a guitarist. Becoming a famous musician is his aim but he fails to excel in his career due to lack of confidence. His two friends (Vennela Kishore & Priyadarshi) are also struggling with a few issues in life. When nothing is going in their favour, they meet a scientist Paul (Nasser). He invented the time machine that fails in its first attempt. He decides to use Aadi for retrying his time machine. Aadi decides to take the risk in order to save his mother who died in his childhood. In the hope of changing their lives, his two friends join him in the time machine. They go two decades back and what are experiences they faced and what happens after that forms the crux of the story.

There are not many science fiction films that came out on Indian screens that are based on the concept of time traveling. But a lot of films from that short list managed to impress the audience heavily. ‘Aditya 369′ which came out three decades back looks interesting even today. Even Suriya’s ’24’ gives us a unique feeling that you want to experience again and again. The Tamil film ‘Indru Netru Naalai’ is also an impressive film. While these films have the same concept, the screenplay is quite different from each other and engages the audience throughout. Now Sharwanand and Shree Karthick’s ‘Oka Oka Jeevitham’ used the time traveling concept and takes us to a whole new world. What separates this film from the past three movies is the mother sentiment. The importance of mother’s character and the scenes involving her evoke a lot of emotion that touches your heart. Also, the time-traveling concept and the twists give us an edge-of-the-seat experience. Situational comedy provides the required entertainment in places. While ‘Oke Oka Jeevitham’ is not the best time-traveling film, it definitely became successful in impressing the audience big time.

Time travel Is a very interesting subject. We usually feel that it should happen in our lives too. This is the main reason why ‘Oke Oka Jeevitham’ instantly connects with the audience. We get invested in the characters and the director takes us into the story without wasting any time on regular commercial elements. Within 30 minutes, the time-traveling concept is brought into the movie and the three main characters go back in time. We get curious to know what happens from here on. The scenes showcasing the eagerness of the three friends to change the past and Kishore along with Priyadarshi connecting with their childhood selves are very funny. While they provide entertainment, Sharwa takes care of the emotional side by connecting with his mother again. With a mix of entertainment and emotion, the first half gets done at a rapid pace.

The curiosity raises to another level after the interval portions. It helps the director to drive the film in a novel manner during the second half. The screenplay is fairly gripping and how the characters get back to the present time and change the mistake done while time traveling was dealt well and it makes for a very engaging watch. The emotion from the mother character works out even more in the latter parts and the thrill factor worked out pretty well though there was less scope for comedy during this period. Despite a few scenes getting dragged more than needed, the movie runs smoothly. Compared to the screenplay and story till then, the climax looks a bit normal without any high emotions. However, it does not disappoint at any point. The makers established that no one can change fate in a very effective manner. Shree Karthick succeeded in coming up with an engaging time-traveling drama with good emotions and entertainment. This movie is going to be a huge sigh of relief for Sharwanand. He impresses with his performance too and there is a good chance that this film becomes a satisfying success at the box office.

Sharwanand comes up with a performance that pleases the audience after a long time. It is a tailor-made character for him and he arrests you with his acting during the emotional sequences. The mother sentiment scenes were well written and executed. Sharwa’s performance during some scenes is just applause-worthy. Ritu Varma did an okay job in the brief role she was offered. Vennela Kishore and Priyadarshi competed with each other and gave their best. Their characters have a lot of significance in the story and they took care of the entertainment department wonderfully. Amala Akkineni is endearing in the mother role. It will be great to see her in many such roles in the coming days.

Each and every technician did a great job for this flick. Jakes Bejoy’s music has a lot of feel. The ‘Amma’ song stands out and the background score too is effective. Sujeeth Sarang’s camera work deserves a lot of praise. The visuals are colorful and suited the mood of the film. The production values are great and Tharun Bhascker’s dialogues are in his typical style. They are natural yet impactful. The editing is quite sharp and so is the art direction. Shree Karthick proved his daring by selecting a unique story for his debut film. His screenplay locked the audience and made them very curious. His work as a director and writer is very impressive. He has a great future in the film industry if he makes the right choices.