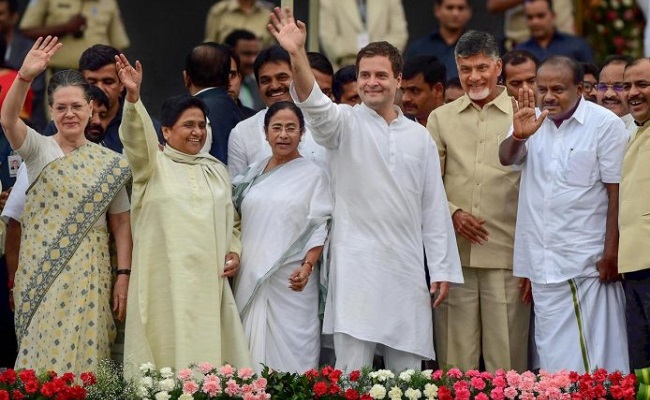 Having sensed that the chances of TDP retaining power in Andhra Pradesh are remote, TDP chief and AP CM N Chandrababu Naidu is desperately trying to shift to national politics and play a crucial role in the formation of a non-BJP government at the Centre by bringing regional parties, Congress and Left parties together.

But the two most powerful women politicians in the country are blocking Naidu’s attempts to emerge as a ‘strong force’ in national politics.

Both the ladies are giving sleepless nights to Naidu and blocking his attempts of forging a non-BJP Front before the declaration of Lok Sabha results on May 23 and after.

Both the ladies want to become Prime Minister and no one is ready to compromise on this though Naidu is making all the attempts to convince one of them to drop their plan of becoming PM.

With this, Naidu’s efforts to convene a meeting of all non-BJP parties is getting delayed.

Naidu is already forced to postpone this meeting in Delhi twice as Mamata and Maya want him to announce one of them as PM candidate first.

With so many conditions being imposed by these two ladies in forming the non-BJP Front , Naidu has been left clueless and shattered on how to go ahead.

Naidu wants to emerge as a ‘strong force’ in national politics before LS results are out as he fears that once Jagan becomes CM in AP after May 23 results, there will be hardly anyone who would look at Naidu for help.

To avoid this, Naidu wants to bring all non-BJP parties together before results and play the role of a convenor of the front like he led United Front as convenor in 1996 and play a key role in national politics by deciding who should be the next PM.

But these two ladies are creating hurdles in his way and forcing him to postpone the meeting of non-BJP parties.