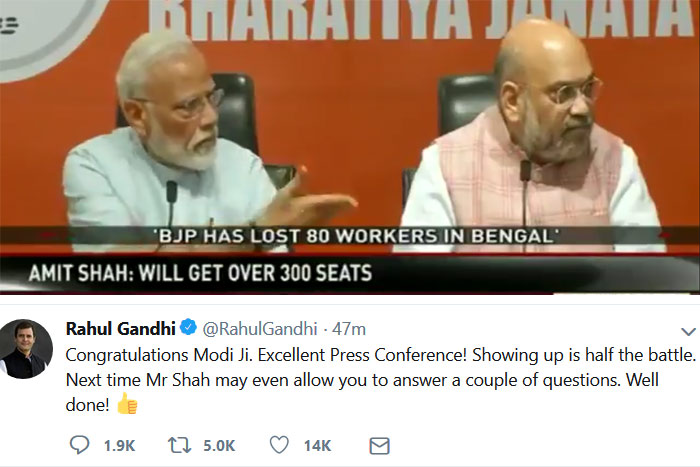 Prime Minister Narendra Modi is perhaps the only Prime Minister in the history of India who did not attend press conference till date. But, he changed it with his first-ever press meet and interaction with journalists in Delhi where he appeared with BJP Party President Amit Shah. This Press Conference of Modi also made to the top trends on Twitter.

The Prime Minister, however, went off tangent when he began talking like one of his election speeches which soon got the media persons disinterested and frustrated. In his beginning lines at the press conference, Modi said: ‘Our democracy is a vibrant one, full of goodness. I have come to you to thank you for giving me ashirvad (blessings) and letting me work for the country for the last five years.’

However, when a reporter asked Modi a question, he responded saying he will not take any questions because the press conference is being addressed by Amit Shah and in BJP’s system, discipline has to be followed. This irked the journalists further and when another reporter asked a question to the Prime Minister, Amit Shah said ‘I will answer your questions. It is not necessary for the Prime Minister to answer every question of yours.’

However, he soon attracted trolls and criticism from the journalists who said Modi’s first press conference was probably confused as Modi’s Mann Ki Baat. Meanwhile, Congress President Rahul Gandhi tweeted: ‘Congratulations Modi Ji. Excellent Press Conference! Showing up is half the battle. Next time Mr Shah may even allow you to answer a couple of questions. Well done!’

Several trolls began criticising Modi for re-directing al the questions to Amit Shah. Journalists said ‘only Amit Shah answering questions at press conference. PM redirects questions to the party president, sitting quietly next to Shah on stage.’ Meanwhile, trolls had a field day as many said Modi didn’t have scripted answers like his interview with News Nation and that’s why he remained silent while some said it was Modi’s ‘guess appearance’ at his own press conference.