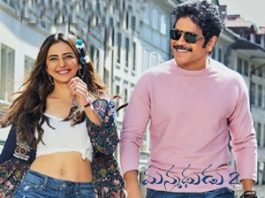 Manmadhudu 2 is not a sequel to Nagarjuna’s classic comedy Manmadhudu but a remake of French film Prete-moi ta main. It is about a man who doesn’t like to have committed relation, but loves to sleep around with whoever he likes.

Sambasiva Rao aka Sam (Nagarjuna) is a middle aged bachelor who lives alone and likes to have one night stands all the time. When Sam’s mother and his family pressurizes him for marriage, he hires a waitress named Avanthika (Rakul Preeth) to act as his lover. Things don’t go as planned and Samba can’t help but fall in love with her.

Nagarjuna’s physique is superb for a sixty year old, although his face gives away his age a lot of times. His styling is impressive and it is cakewalk for him to play a charmer. Rakul Preeth is comfortable beside Nagarjuna and the characterization of Avanthika doesn’t make this pair look odd together. Vennela Kishore saves the film to an extent with his impeccable comic timing. He got some support from Rao Ramesh. Supporting cast consisting of Lakshmi, Jhansi and others is adequate.

Rahul Ravindran who made a refreshing film in his debut as director couldn’t make this remake work. He couldn’t recreate the magic of Manmadhudu anywhere in the film, but still named it Manmadhudu 2. Barring a few episodes, Rahul’s direction falls flat.

Songs are not catchy and the background score is pretty standard. Cinematography is good with eye-catching visuals of Portugal. Dialogues are okay in parts, but there are far too many adult jokes. Editing is not up to the mark. Production values are fine.

One would wonder why this film has been remade in the first place. The story offers nothing new in terms of plot or treatment. A middle aged womanizer falling in love with a young girl isn’t an exciting idea for Nagarjuna to get into the shoes of Manmadhudu again. Firstly, Manmadhudu was a class film with clean humor. Secondly, Manmadhudu has fantastic dialogues, comedy, emotions and a superlative soundtrack that made it a classic. What was Nagarjuna thinking while naming this as Manmadhudu 2? What was he thinking while taking up this role at this age.

It might have been okay to an extent had he played this role a ten years ago. But now Nagarjuna looks very odd when he is ‘making love’ to younger women. Few scenes in the beginning will leave the family audience in utter shock as they wouldn’t expect this from a responsible star like Nagarjuna and that from a film that is certified UA by the censor board. Thankfully, such visual ‘humor’ is limited to few scenes, but there are far too many double meaning dialogues to ignore.

Comedy in the first half works in parts and thanks to Vennela Kishore, who keeps it classy despite the adult stuff. Second half is a pain to watch as the film runs on a predictable note with routine scenes. Why would a younger woman fall for a much older man? All Rahul could think of is a scene where the man shows his muscle power and helps her hit back the person that had hurt her. We can see where the film is heading right from the intermission point and there isn’t much in between that can keep us entertained. Even the comedy turns pale after a point as the comedians constantly keeps drawing a blank.

Manmadhudu 2 is a disappointment on a whole except for some genuinely funny moments. Make sure to keep your kids away if you are determined to watch this.