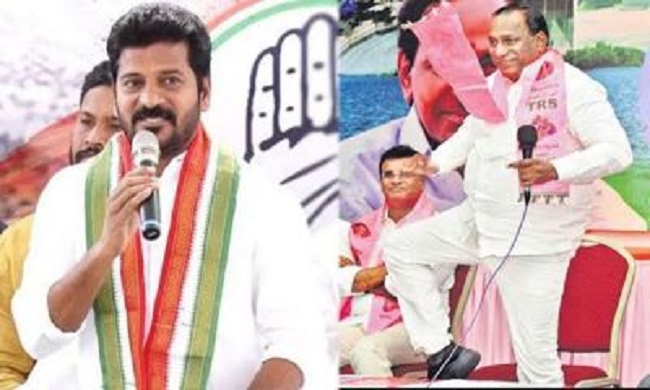 Looks like the tussle between Revanth Reddy and TRS Minister Malla Reddy will not settle soon. Earlier the two leaders dared each other to resign from their posts and go for the elections to see if the people still vote for them or not. As a new development, Malla Reddy had targeted Revanth Reddy.

Targeting Revanth Reddy over his TPCC appointment, Malla Reddy had alleged that the post was purchased by Revanth for Rs 50 crore. He also found fault with Revanth Reddy criticizing Chief Minister KCR and IT Minister KTR.

Minister Malla Reddy said that KCR has been implementing various schemes to benefit a lot of sections in the state and that is why the opposition leaders like the Congress are making comments against the Chief Minister for this and such comments were not appreciable, he said.

Malla Reddy also hit back at Revanth Reddyâ€™s allegations of involvement in land grabbing. He dared him to probe the allegations. I dare Revanth Reddy to quit his post and go for the polls. If he emerges victorious in the polls, I will quit political life, he said.

Revanth Reddy had used strong words against Malla Reddy and termed him a broker. Alleging that in the past Malla Reddy used to sell milk and water, Revanth Reddy even alleged that the place where the CMR hospital now stands is an encroached one.