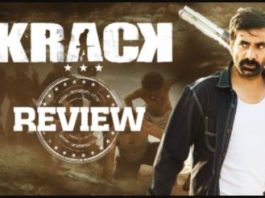 Ravi Teja’s Krack was initially slated to hit the screens last summer but the onset of Covid-19 pandemic resulted in indefinite postponement of release. The film finally hit the big screens today after clearing the financial hurdles which caused a few last-minute problems to the makers. Here is our review of the action thriller.

Veerashankar Potharaju (Ravi Teja) is a straightforward police officer who revolts against those who exhibit anti-social traits. He doesn’t care about the background and the social stature of the opposite person and takes stern action if he/she is found guilty. Incidentally, Shankar is transferred to Kadapa to nab a criminal and in the process, Kondareddy(Ravi Shankar) a small-time criminal in the area gets to know about Veerashankar’s powerful past through Kataari Sreenu(Samuthirakani), who previously came face to face with the menacing cop. The rest of the story unveils what really happened between Veerashankar and Katari Sreenu, and who finally won the battle against each other.

What about on-screen performances?

Ravi Teja finally provides full meals to his fans as he plays a full-on mass role after a long time. He excels in the role of a menacing police officer and nails the massy dialogue delivery and body language. However, one might feel that the character could have been established in a better manner. Shruti Hassan gets a meaty role and she makes delivers a fine performance and does particularly well in penultimate scenes. Samuthirakani is seen as the antagonist in the film and he is just okayish. He often underplays and that dampens the intensity of the proceedings. Varalaxmi Sarathkumar plays a typical lady baddie and there is nothing new about her role. She had played similar roles multiple times in the past. The rest of the star cast deliver what is expected of them.

What about off-screen talents?

GK Vishnu’s cinematography is one of the main assets of the film. He does follow a commercial template in some sequences but also tries out new camera angles and shots in certain action scenes in the film, which give a new experience to the viewers. These visuals are complemented with Thaman’s background score as he does a decent job with the soundtrack. But his background music is unnecessarily loud in some scenes. Sai Madhav Burra’s dialogues are very impressive and they enthrall the masses.

The director, Gopichand Malineni does not try anything new when it comes to the story and the narrative. A straightforward cop locking horns with antagonist and a rivalry brewing between them. This plot has been in usage for quite a while now and Gopichand picks the very same set-up. The character establishment is not up to the mark as the way the protagonist role is portrayed does not abide by the narrative. More often than not, one might feel that the mannerisms and mindset of the male lead do not back up his actions. The screenplay is way too predictable and even a kid can guess what happens next in the film. The film is projected as a proper commercial potboiler but it barely lives up to the hype given to it by the unit.

Krack was promoted as a mass masala entertainer which will have vintage Ravi Teja’s energetic performance as its cornerstone but it doesn’t do complete justice to all the hype. The film has a routine story and predictable screenplay. A few dialogues which are aimed at the masses are good. Ravi Teja’s wait for a solid commercial hit continues.

Watch or Not? A strictly average film with very little entertainment. Ravi Teja Had delivered better films in past.

Is Meher Ramesh Taking A Huge Risk With Chiru?

Vijay Deverakonda – The Only South Hero At Karan Johar’s Birthday...

BJP Trying to Attack TRS as it did with Congress!

Can KCR do What Congress Could Not in Gathering Support?