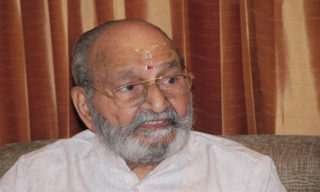 The Tollywood industry is one of the biggest industries in the country and it has produced some veteran filmmakers who created a niche for themselves with their unmatchable pieces of work as craftsmen. Legendary filmmaker Kasinadhuni Viswanath, aka K Viswanath, is one such personality.

Pushing Tollywood into a big state of sorrow Viswanath Garu passed away at 92. The Tollywood fraternity is mourning his death. As a director and actor, he left a big legacy in the industry. He gave some of the best classics. In his illustrious career, he directed Telugu and Hindi films too.

What makes him different from others is he is very fond of arts and artists. His films talk about the rich culture of arts and their great significance. He pleasingly presents artistic values to the audience.

Kasinadhuni Viswanath directed many classic films but the musical drama Sankarabharanam remains iconic. When there was no concept of Pan-India films, Sankarabharanam was released in other languages and won critical acclaim. The specialty of the film was the original songs remained the same in dubbed versions only the dialogues were changed. Even with Telugu songs the classic movie earned a massive response.

In a scene in Swarnakamalam, the hero of the film, Victory Venkatesh schools a government official about a priest. He tells the officer that everyone must respect scholars and this gives good value to the post he is holding.

The veteran director writes his script in a way that heroes in his film come from various sections of society. He made a happening star like Megastar Chiranjeevi play a cobbler in his film. That was his style of making films.

Despite having a massive star like late NTR, he did not go for fights in the film. He said that going for such things would spoil the nature of the film.

Viswanath started his career as a sound engineer and became an assistant director next. He has the opportunity to work with NTR, ANR, Shobhan Babu, Chiranjeevi, Venkatesh, and Balakrishna. He never went out of his style while working with these stars.