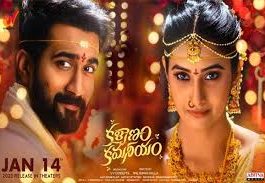 Will their gamble paid off? Check out.

Story:
Shiva (Santosh Soban) marries Shruti (Priya Bhavani Shankar). She works as a software engineer, while he is jobless. Shruti is more than happy to shoulder the household’s financial burdens until Shiva secures a decent job.

Despite his skills and credentials, Shiva has a hard time finding work. At first she sympathises with him, but later she begins to have doubts about his abilities and becomes angry with him.

But she still goes out of her way, paying a consultancy Rs 10 lakh, to help him land a job. However, he loses the cash, and this creates more problems for him.

Artistes’ Performances:
Santosh Soban, a talented actor, plays the role effortlessly. He is sincere, and his understated performance is one of the film’s highlights. Priya Bhavani Bhaskar makes her Tollywood debut in this film, and she does well.

Technical Excellence:
Karthik Ghattamaneni’s cinematography is a big plus. The music is good and the Songs are peppier. Production values are decent.

Analysis
The relationship story “Kalyanam Kamaneeyam,” about two young people, gets off to a promising start. The story it attempts to tell is relatable: that of a young couple whose relationship is tested. A short film with this straightforward of a plot would do just fine. A feature film requires more than a simple story and a short running time.

Theater-goers expect a film with an engaging narrative and more developed characters. “Kalyanam Kamaneeyam,” despite having a real life situation as the plot point and having a good intention, is missing that.

There isn’t much to enjoy beyond the bare bones of the story. The film’s 106 minutes duration is a relief.

As was previously mentioned, the film gets off to a strong start, with some engaging early scenes involving Priya Bhavani and Santosh. The hero’s inability to secure gainful employment is portrayed realistically.

As the film progresses, however, it becomes clear that the story is too thin to be explored in depth on the big screen, and we are left with the impression that it would have been better suited for the OTT platform.

In addition to these problems, the proceedings become tedious, revealing the concept’s limitations and the outdated writing of first-time director Anil Kumar Aalla.

Overall, “Kalyanam Kamaneeyam” has a simple plot, relatable characters, and a likeable couple, but it lacks verve. These kinds of efforts are better suited for OTT consumption rather than theatre viewing.