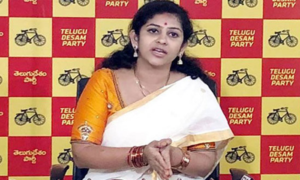 In another jolt to the TDP, the party’s official spokesperson Yamini Sadineni has bid adieu to her post and the party. Interestingly, she posted her handwritten resignation letter in the TDP WhatsApp group. Yamini has been away from the party affairs since the general elections.

Explaining the reason behind her resignation, Yamini said that the TDP is reeling under internal clashes and several other issues ever since its humiliating defeat in the general elections earlier this summer. She said that there is no harmony between the party leaders.

Even though she exited the TDP, Yamini was all praise for its President Nara Chandrababu Naidu. She said that she has learnt theintricacies of politics from Chandrababu Naidu and praised the former AP CM’s patience, vision and his love for the common people.