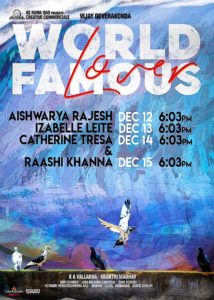 First look poster of Vijay Devaraonda in his ongoing film World Famous Lover was released sometime ago and it promised the film is going to be an intense emotional drama.

The film is slated for release on February 14th. Interim, the makers are planning innovative promotions for the film.

Starting from 12th of this month, first look posters of Vijay Devarakonda’s four lady loves in the film will be released on every day basis.

Aishwarya Rajesh’s look will be unveiled on 12th, followed by Izabelle Leite, Catherine Tresa and Raashi Khanna’s looks on 13th, 14th and 15th respectively. 6:03 PM is the time fixed to release all the first look posters.

In the announcement poster, we can observe four pigeons indicating four heroines in the film helmed by Kranthi Madhav.