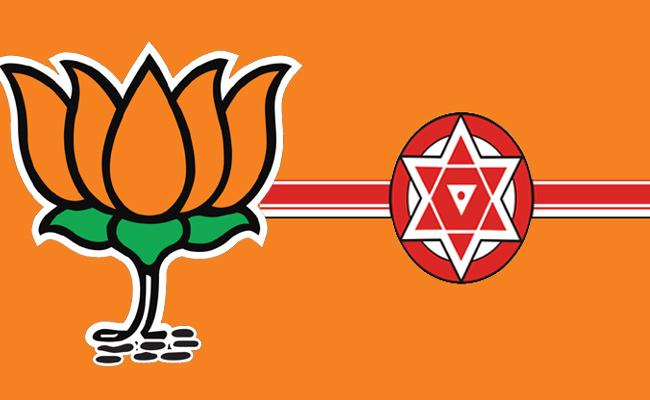 “Will Lotus blossom in “Glass” or can Glass take the weight of the Lotus? This is the question with the BJP and the Jana Sena forging alliance in Andhra Pradesh.

As the leaders of the two parties met in a hotel in Vijayawada, the discussion was around this question in the political corridors. Who will benefit from this alliance had become the major question.

The BJP has no footing in the State except a handful of votes in every village.

The party had no record of winning any election in the State except one corporator in Vijayawada Municipal Corporation in the 1980s.

Dogiparthi Jhansilakshmi had won as coporator from the One Town area of Vijayawada in those days on BJP symbol and there was no one elected even as ward members in gram panchayats.

Even now, the party’s position is the same. It cannot win even a single gram panchayat, if they contest the local body elections.

The fate of the Jana Sena is no different. The party could not win the election, except one MLA in East Godavari district.

Rapaka Varaprasad had won the election and most of it is because of his own image and following rather than the vote base of the Jana Sena.

The party chief, Pawan Kalyan, himself had lost the election at two places – Bhimavaram in West Godavari and Gajuwaka in Visakhapatnam. His brother, Nagababu, too had lost the Narasapuram Lok Sabha election.

The two parties have not seen the victory on their own, with the above exceptions. To be positive, the Jana Sena is placed better in terms of vote bank, than the BJP in the State.

Now, with the two parties coming together with an eye on the 2024 general elections, the big question is which party will benefit from the alliance!

It is good if either of the parties reap the benefit. But, what if the alliance benefit the YSR Congress and destroy the TDP at the grassroots?