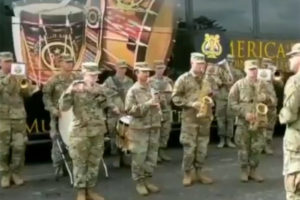 A spine-tingling moment for all Indians as an American army band played the Indian National Anthem, ‘Jana Gana Mana’, during the joint Indo-American exercise in Washington. The video on the same is going viral on the internet.

The video shows American soldiers playing the National Anthem on their trumpets on the concluding day of the joint exercise and it is indeed a proud moment for India. Started on Friday in Washington, this joint military exercise between India and the US is all about the ongoing defence co-operation between the two nations.

Earlier too, both Indian and American soldiers were seen merry-making to the popular Indian marching song ‘Badluram ka Badan’ during a joint military exercise. The video went viral in a short span where all soldiers were relishing the music in a joyous state.

Now, this Yudh Abhyas 2019 exercise is one of the largest joint-running military training and defence co-operation endeavours between India and the US. Both the armies of India and the US will be trained together and execute operations for neutralisation of various threats.

The interesting part was that even female Indian officers took part in this exercise. Also, experts from both sides will hold academic and military discussions to share each other’s experiences on varied topics for mutual benefit.