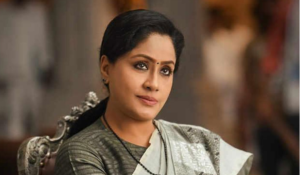 Senior actress Vijayashanti, whose political stint did a lot of somersaults as she jumped into Congress party right before TRS clean swept the election in 2014, is now coming back to films. And her first movie after the mega hiatus of a decade is none other than Mahesh Babu’s Sarileru Neekevvaru.

An interesting talk is being heard about the voice of Vijayshanti and how she wants to dub herself rather going for dubbing artists. The teaser of Sarileru Neekevvaru has already seen Vijayashanti dubbing for her part, and we hear that she wants to impress with her real voice. Back in the day, most of Vijayshanti’s blockbuster has voice artist doing the job for her. Heroine Saritha used to give a voice for the actress.

As long as she used dubbing, things went pretty well for her, but once she shifted to using own voice, Vijayashanti never tasted success at the box office. Now that she’s coming back to films after a decade, the talented former heroine wants to make sure that she wouldn’t get affected by this dubbing thing.

As most millennials don’t know how Vijayashanti’s voice used to be, she is preferring to with own tone. Hope she succeeds with it.