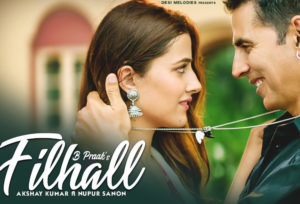 Excessive thinking and over-protective moves sometimes result in a stupid debut in the case of few star kids. The one, in this case, is Nupur Sanon, who happens to be the younger sister of heroine Kriti Sanon. And for her debut, Kriti is waiting from last three years almost, but finally made a poor choice.

After rejecting many Telugu offers that came their way and other big assignments, Nupur Sanon has picked a music video to mark her debut as an actress. Featuring alongside Akshay Kumar as his ex-lover, she appeared as a patient who meets with an accident. And the doctor who saves her is none other than her former BF.

Well, the song is titled Filhall, sung by a Punjabi singer named Bpraak and doesn’t sound much appealing in the first glimpse. And then, neither Akshay or Nupur make an impression as they don’t like a pair in the first place. Usually, glamorous debuts or beautiful appearances work for heroines, but this hospitalised debut isn’t appealing at all.

One wonders if the lack of offers made Kriti chose such a bad introduction move for her sister.