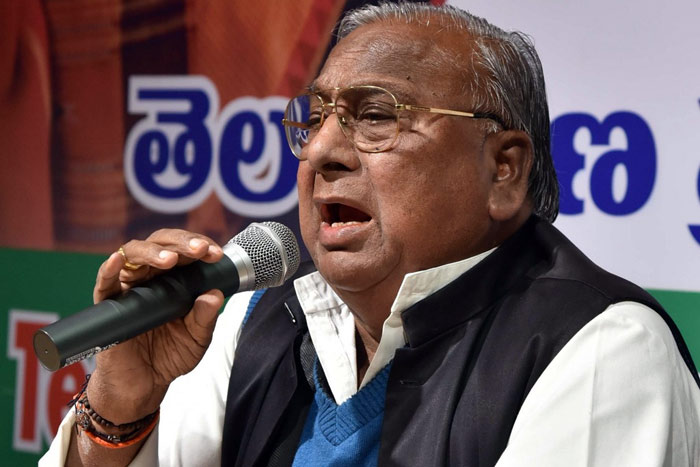 Congress senior leader V. Hanumantha Rao seems to be on fire these days. While his other colleagues seem to be confused about what they should be doing following the party’s drubbing at the hustings in Telangana following the Assembly elections, the senior leader from Congress seems to be quite active and has become the lone crusader fighting the Telangana government.

Following the suicides of nearly 21 inter students after a goof up of Intermediate results, VHR threw a gauntlet to IT minister and Telangana Chief Minister K. Chandrasekhar Rao’s son, K.T. Rama Rao that he should swear in front of village goddess Peddamma Thalli that he had no links with the software organisation Globarena Technologies, that bagged the tender for processing the Inter results. However, KTR did not turn up at the temple.

Then, he sat on a protest, fighting the unjust removal of Ambedkar Statue at Panjagutta in Hyderabad. VHR threatened to launch hunger strike if Ambedkar’s statue was not installed at Punjagutta after May 10. He said that the Congress leaders would stage a protest against the removal of the statue at Dharna Chowk under the leadership of Manda Krishna Madiga.

Not stopping at that he also questioned Telangana Chief Minister K. Chandrasekhar Rao on how he could go on a tour when the parents of Inter students were grieving over the loss of their children following a goof-up in the Inter results released recently.

While this has come as a surprise to many TRS leaders, they are secretly appreciating his guts for speaking up against the current government. Many are also of the opinion that Congress leaders, much younger than him in age, should learn from him and begin responding to public issues. Political observers say that VHR is setting an example for other opposition parties. Looks like age is just a number for VH Thatha!