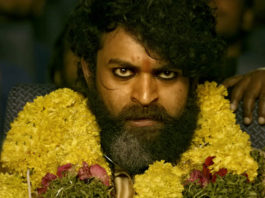 Ace director Harish Shankar’s “Valmiki” (the title has been changed to “Gaddhalakonda Ganesh” at the eleventh hour) starring Varun Tej has generated a lot of curiosity among the film buffs much since it went on to the sets.

The teaser and trailer of the film made everyone sit up and notice. And the remixed version of S Raghavendra Rao’s blockbuster number – “Elluvocchi Godaramma” has further raised the expectations of the audiences.

Let’s find out how far “Valmiki” lived up to the expectations.

Story:
An aspiring filmmaker Abhilash (Atharva Murali) decides to make a film about a dreaded gangster’s life. The gangster is Gaddhalakonda Ganesh (Varun Tej) who lives in Gaddhalakonda.

Abhi moves to this town and starts observing his activities and recording them in the hope to write an authentic story about a real-life villain.

Later, he gets acquainted with Ganesh and the gangster allows the director to make a picture on his life for the screen on the condition that he should be playing himself on screen. This leads to a melee of unforeseeable situations.

Artistes’ Performances:
The film out-and-out belongs to Varun Tej. As Gaddhalakonda Ganesh, he has given his career-best performance. He has transformed his looks and body language, and his acting is also an absolute delight. The dialogue delivery is sharp. He has put in a lot of effort. Atharvaa Murali as the aspiring filmmaker is impressive in his Telugu debut.

Pooja Hegde as Sridevi is another asset. Even though she appears in the latter part of the movie, she brings glamour to the screen in her limited portion.

Technical Excellence:
Music by Mickey J Meyer has given superb background score and catchy songs. This is his first out and out mass movie and he has come up with songs perfectly in sync with the genre.

“Waka Waka” stands out. Dialogues written by Harish Shankar are the main highlight. Bose’s cinematography is an asset.

Editing should have been sharper. The film’s pace is inconsistent.

Analysis
“Valmiki”/”Gaddhalakonda Ganesh” is an official remake of the 2014 Tamil movie “Jigarthanda.”

The original Tamil movie had an interesting concept: a filmmaker attempting to make a movie with a real-life gangster and facing consequences when the gangster wants to act as the hero.

The collusion of the world of filmmaking and the world of rowdies was an excellent idea and it had the superlative performance of Bobby Simha as the gangster that won him a national award.

Harish Shankar took the basic concept and changed a lot to suit the image of Varun Tej. The director even took credit for changes, not for the screenplay.

But the film has consistency in one part – the performance of Varun Tej. With a complete transformation, Varun Tej has not only got the act right but also ensured that he is very believable in the role. He holds the movie till the end with his acting.

While the middle portions have gone off the track, the movie starts working again with the final portions.

Harish Shankar has done some drastic changes to the original movie which have worked well for commercial reasons. The second half has an interesting back story for Varun Tej.

The love track of Varun Tej and Pooja Hegde is incorporated for commercial reasons but it is interesting. The song “Elluvocchi Godaramma” is worth all the hype. The final sentiment scenes and the transformation of a rowdy into a good person are also handled well.

On the downside, this is the overt commercialization of a good concept. The original Tamil movie has many great moments. It is a dark comedy that reeked with original ideas.

Though Harish Shankar has retained the basic structure and story, he has also turned this into a mass movie. Moreover, it is too lengthy.

Nevertheless, the film makes an entertaining watch for many reasons – the songs, the dialogues, and above all Varun’s performance. It is an okay watch.