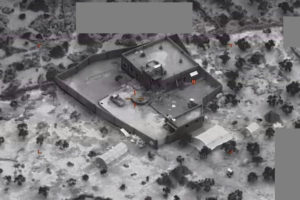 The head of US General Command, General Frank McKenzie, who supervised and participated in the activity of the US raid of the Islamic State of Iraq and the ISIS leader Abu Bakr al-Baghdadi has provided the detailed account of the operation and said the US was on alert for possible “retribution attacks”. The General said the remains of Aby Bakr al-Baghdadi was buried at sea in an underground tunnel(where he led special operations) within 24 hours of his demise.

“US forces discovered Baghdadi hiding in a tunnel when capture at the hands of US forces was imminent,” McKenzie said. Not to mention, Baghdadi was identified by comparing his DNA to 2004’s sample collected when he was captured by US forces in Iraq. Following that, the US released the first photos and videos from Saturday’s raid.

The photos show black and white images of US soldiers approaching the high-walled Idlib compound in NW Syria, a place where Baghdadi was tunnelled up. The General referred to it as a parking lot with large potholes. Before and after pictures of the isolated compound were also released. Also, the released videos showed airstrikes on a bunch of anonymous fighters and even they have fired the helicopters of US forces.

McKenzie further said that Baghdadi detonated a bomb which he wore to kill himself and two young children that were with him, who were under the age of 12. Al Jazeera’s Alan Fisher in Washington, DC said the US had released “very short snippets” of video. “We see the troops moving towards the edge of the compound. We don’t see them going inside. What we are told is that the army then issued orders in Arabic for people to give themselves up, and a number of what they described as non-combatants left the building.”

Post the mission, the defence team headed to a veiled location in Syria for nearly one-hour in a helicopter ride to the compound, and 11 children were escorted from the site unharmed, while four women and two men who were wearing suicide vests and refused to surrender were killed.

In conclusion, the General said that we should never think that ISIS has been defeated as the organization will come up with the new leader sooner or later. Moreover, he also said that US security agencies reminded that Baghdadi’s death has inspired his followers to launch another big attack and we should be prepared for it.