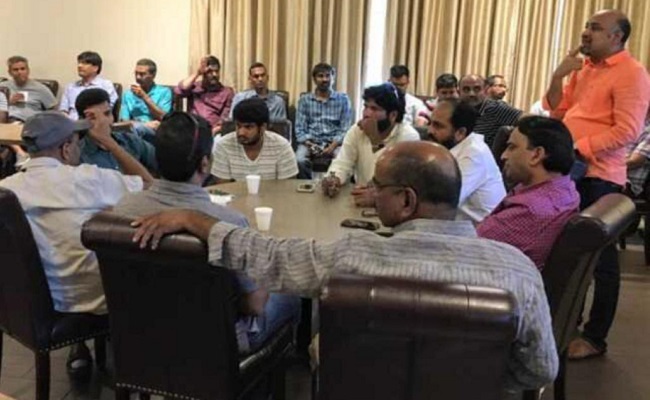 It is going to be an unprecedented show of Non-Resident Indians at Dallas in the United States of America on August 17 when YSR Congress party president Y S Jagan Mohan Reddy addressed them on his maiden visit to the US in the capacity of chief minister of Andhra Pradesh.

The organisers are making massive arrangements for the meeting of the chief minister.

The transport wing has announced that 25 buses are being arranged especially for the NRIs coming from Austin and Houston cities of Texas.

Already, more than 200 rooms were booked for VIPs and guests in hotels closer to the convention centres.

The food committee has announced that agreements were entered into with several restaurants in and around DFW to provide sumptuous food for the 10,000-odd invitees attending the meeting.

Arrangements were made for providing free parking facility for the guests in more than 1300 parking lots near Dallas Convention Centre.

Right from the time of Jagan Mohan Reddy’s landing at Dallas Airport till the conclusion of his meeting on Saturday evening, all security arrangements would be made without giving scope for any lapses.

Discussions were made with Indian Consulate in Houston on the security arrangements to be made by the local YSRC activists.

While 18,000 water bottles would be procured for the guests attending the meeting, the organisers are also arranging cultural programmes by NRI youth and children. They asked all the Telugu NRIs to attend the meeting in big numbers.

Already, huge hoardings have been erected at vantage points across Dallas welcoming Jagan Mohan Reddy. Similarly, advertisements would be given in various media regarding the meeting, the organisers said.