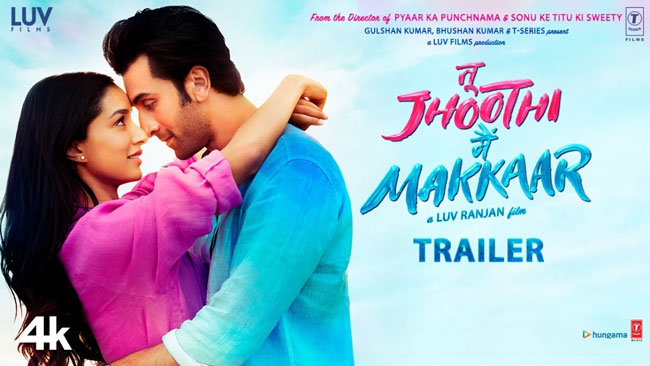 Bollywood’s lover boy Ranbir Kapoor who became a father recently is pairing up with lovely beauty Shraddha Kapoor for the first time in his career. They are going to set the screens on fire in popular filmmaker Luv Ranjan’s ‘Tu Jhooti Main Makkar’. The movie is generating a lot of buzz thanks to the gorgeous lead pair and colorful posters.

Now the makers have released the theatrical trailer which is highly entertaining. Luv Ranjan’s films are always known for their fun scenes and scheming female leads. It looks like he showcased both the hero and heroine as schemers who act like they are in love with each other and still try to sabotage their marriage at the same time.

This leads to a lot of chaos and entertainment. Ranbir did a romantic comedy after a long time and he is at his comedic best. The handsome hero showcased a lot of ease but it is Shraddha Kapoor who stole the show with her lovely looks. The ‘Ek Villain’ beauty was gorgeous on screen and went toe-to-toe with Ranbir in terms of acting as well. She raised the mercury levels with her bikini treats and she appeared highly glamorous in this movie.

This film is going to hit the screens on 8th March and Pritam is composing the music. Hitesh Sonik provided the background score while Santhana Krishnan Ravichandran is the director of photography. Amitabh Bhattacharya penned the lyrics while Rahul Mody and Luv Ranjan write the movie. Anshul Sharma and Rahul Mody are the creative directors while Luv Ranjan produced and directed the film.