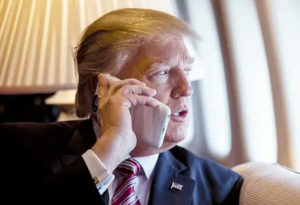 The US President Donald Trump is presently upset with Apple Inc. Trump says he wants the home button back which is missing on the newer iPhone models and expressed his discontentment over it. The President took to Twitter to share his opinions and called out Apple CEO Tim Cook.

Donald Trump tweeted that the home button was much better than the new implementation. However, netizens were left in a dilemma as Apple removed the home button from iPhone models long back and Trump reacting now made the situation perplexed. The outrage that he showed on the company possibly suggests that Trump must have just upgraded from an older iPhone.Because Trump uses iPhone issued by the government and it is possible that it has just been upgraded to a newer model.

Ever since 2007, when the late Apple co-founder Steve Jobs launched the original iPhone, the home button has been a mainstay of all iPhone models and then, the Cupertino, California-based company removed it in favour of swipe controls in iPhone X. After staying upset, Trump tweeted his outrage to Tim, “The Button on the iPhone was FAR better than the Swipe!”

Earlier too, Trump expressed his unhappiness over Apple quite a few times for not having a large screen and tweeted’ I cannot believe that Apple didn’t come out with a larger screen iPhone. Samsung is stealing their business. STEVE JOBS IS SPINNING IN GRAVE’.