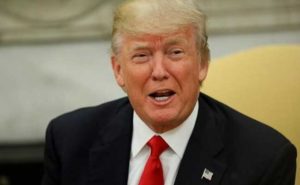 San Francisco: US President Donald Trump has left people astonished with his knowledge of space and the universe and has become a laughing stock yet again after he claimed that the moon is a part of Mars.

In a tweet on Friday, he said: “For all of the money we are spending, NASA should NOT be talking about going to the Moon – We did that 50 years ago. They should be focused on the much bigger things we are doing, including Mars (of which the Moon is a part), Defence and Science.”

Trump’s remarks came a day after NASA Administrator Jim Bridenstine told USA Today that US astronauts would not be able to make a lunar landing by 2024 unless Trump administration’s $1.6 billion budget increase request is not approved by the US Congress.

As soon as Trump tweeted, people from around the world started trolling him with witty one-liners, jokes and memes.

“Sigh! His dad must have paid his way through astronomy class too!” wrote American long-distance runner Ryan Hill.

“Trump’s knowledge on this matter is one small step for man, one giant leap backwards for mankind,” said Emmy-nominated filmmaker Jeremy Newberger.

“Based on the President’s track record here on Earth, I don’t think NASA needs his input on how to handle space,” tweeted Sam Vinograd, national security analyst at CNN.

Earlier in May, Trump, who is infamous for making controversial statements, war threats and spelling errors on his Twitter handle, confessed that he uses Twitter as a “typewriter”.

Later, Twitter Co-founder, Ev Williams called Trump “master” of the platform, arguing the potential negative effects of the President’s tweets on the country’s political discourse are “trivial compared to the effect of the broader media”.

Mars has two moons – Phobos and Deimos – however, the Moon which orbits the Earth is not a part of the Red Planet.