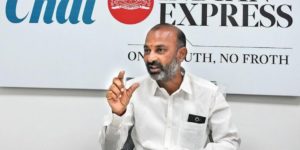 SIDDIPET: Taking a dig at Finance Minister T Harish Rao, State BJP president and Karimnagar MP Bandi Sanjay Kumar said on Thursday that the pink party leader is scared of losing his Cabinet berth if the TRS candidate gets defeated in Dubbaka, which is why he is going on making unnecessary allegations against the Opposition party leaders.

“Harish is spreading false propaganda among the people to ensure the victory of the TRS candidate in the ensuing Dubbaka bypoll. He already has a clear idea that the BJP candidate will win the seat. As a result, the Minister is trying to level allegations against our State leaders and the Central government to try and retain the seat,” he said.

On Thursday, Bandi Sanjay toured various villages in Dubbaka and campaigned for the party candidate. “We will teach the pink party a lesson for spreading false propaganda against BJP and Centre. We request the voters to elect Raghunandan Rao as their new MLA and give the TRS and its arrogant supremo a fitting reply,” Bandi said.

Alleging that the CM has not been honest with the people of Telangana, Bandi said that it is not true to say that the Centre didn’t do anything for the development of Dubbaka. He also assured the people that Raghunandan Rao will raise his voice for the rights of people and will ensure that all eligible persons get pensions on time.

Bandi also blasted the Siddipet CP for the incident at Lecturer’s Colony on Monday, saying that cop is working at the behest of the ruling party. “TRS working president KT Rama Rao said that the BJP leaders have no culture. Before saying this, he should have asked his father to learn some culture,” Bandi added.

‘Why did Ramalinga Reddy never become a minister?’

SIDDIPET: Taking a jibe at TRS, Congress working president A Revanth Reddy asked why Solipeta Ramalinga Reddy never made it to the State Cabinet even though he won as an MLA four times. “If Ramalinga Reddy was a dear to all, then why didn’t he become a minister,” Revanth asked while touring various villages in Mirdoddi mandal as part of Congress’ election campaign, on Thursday. Speaking on the occasion, he lambasted the pink party for not fulfilling its poll promises