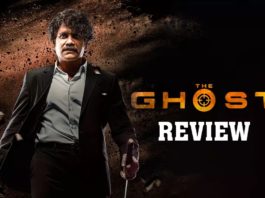 Nagarjuna Akkineni and director Praveen Sattaru have teamed up for the first time. The film’s trailer and teasers created a lot of interest.

Five years later, he gets a call from his estranged sister Anu (Gul Panag). He heads to Ooty and finds that his sister and his niece (Anikha Surendran) are under threat.

Vikram agrees to stay there and protect them. Anu is a chairperson of a huge business empire. Another company is trying to take over Anu’s company. Despite his efforts, Anu gets killed in an attack.

Will Vikram protect his niece safely?

Artistes’ Performances:
For senior Nagarjuna, the role is a cakewalk. He has done such roles in the past. All he does in the film is wields swords, blast ammunition, and indulge in shootouts.

Sonal Chauhan appears as an Interpol officer. She does some decent action stunts. Gul Panag plays a typical sister’s role.

Technical Excellence:
Mukesh’s cinematography is terrific. More than anyone else, the stunt masters have more work to do in the film, and they excel in their jobs. The background score is apt. Editing lacks sharpness as the lengthy action episodes go on and on.

Analysis
We all know that story takes a backseat in action dramas. But when the wafer-thin plot serves as an excuse to flip one action sequence to another, it feels dated. “The Ghost” is one such example.

Praveen Sattaru who won the name for his slick execution of “PSV Garuda Vega ” wrote a one paragraph story. An Interpol officer who quit the job gets a personal assignment of saving his sister from the enemies. Praveen Sattaru has not developed any worth talking about moments other than this one-line story and filled it with a series of action stunts.

One action sequence is set in a desert, the other on the busy city roads and the next one in a hill station. Another one is in a house. The next one is in another place. The locations change, and the scenes change, but the crux remains the same: a fight scene.

No film in recent times has come with a series of action stunts with little to no story. Furthermore, given all the hype around threats that the hero’s sister faces, we expect a strong antagonist who might prove to be more than a match to the hero Nagarjuna, but what we get is a cardboard villain character.

To be fair, the first half of the film at least has some reasoning as it focuses on Nagarjuna’s Interpol days and a brief flashback about his family. The second half is a mess. The climax is excruciatingly bad.

By adding “KGF”-like machine gun sequences and Kamal Haasan’s Vikram-like fight scenes, Praveen Sattaru has spoiled it further. For a film that also talks about sister and niece, the sentiment scenes are superficial.

The blame entirely lies on Praveen Sattaru. It is his lame writing that is the villain.

On the whole, “The Ghost” is another senseless action drama with no effective storytelling.