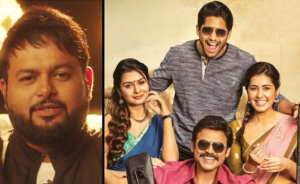 One of the upcoming films that is bound to have huge comedy quotient is none other than ‘Venky Mama’ that features Venkatesh and his real-life nephew Naga Chaitanya in the leads. As the film is heading for a December 25th release, here is a mega feat it should do actually.

Reports are coming that Venky Mama went out of budget due to various reasons including multiple reshoots, visual effects and unwanted expenses. Despite the fact that Suresh Babu is at the helm, the film’s production costs are said to have touched almost 50 crores, leaving Venky and Chay in a bit of dilemma. Because recovering 50 crores share from the box office is a daunting task in case if the film turns out to be average farer.

While they could easily get 15 crores by shelling out digital, satellite and remake rights, the rest 35 crores share should be recovered from box office only. For that to happen, the film should get blockbuster talk. And to ensure massive openings, December 25th is not a major season, unlike Sankranthi or Summer. So Thaman’s songs should create a huge impact with their magic such that footfalls will be high on release day.

For now, the onus is on Thaman and later when the film releases, we have to see how director Bobby carved the best out of Venky and Chay. Raashi Khanna and Payal Rajput are the leading ladies of the movie.