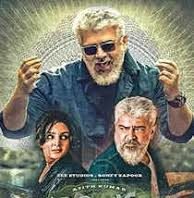 The first film of 2023 is Ajith’s “Tegimpu”, a dubbed version of Thunivu. The film didn’t create much hype in Telugu but given it is Ajith’s film and the director’s previous work made the film lovers to look forward.

Let us look at its high points and low points.

Story:
In Visakhapatnam, a gangster and his henchmen plan to rob the “Your Bank,” only to discover that another gang, led by a mysterious man known only as “Darkdevil” (Ajith), has taken over the bank and is holding its customers hostage. From the outside, his companion Ramani (Manju Warrior) is assisting him.

There are 25,000 crores of rupees that the bank’s chairman has hidden there.

The police commissioner (Samuthirakani), on the other hand, is trying to devise a plan to apprehend Darkdevil. The cop quickly realises that the Darkdevil’s goal is not to steal the cash but to smear the bank’s name. Why?

Artistes’ Performances:
Ajith Kumar flaunts his swagger. There isn’t much to do except show off his style and star power, which he does in spades.

It’s great to see senior actress Manju Warrier get a chance to do action stunts, but her character appears underdeveloped. It’s unclear whether Ajith and Manju are friends or a romantic couple.

It’s fine to have John Kokken as the bank’s chairman. Samuthirakani and Ajay both do a routine job in their roles.

Technical Excellence:
The film has stunning cinematography, particularly in the action sequences on the sea.

Nirav Shah contributes his expertise in bringing rich value to the frames. However, the artwork is not exceptional. The bank set is a little tacky.

Ghibran’s background score is ok, but the two songs are forgettable. Despite the fact that the editor cuts the film at breakneck speed, the film’s length feels bloated.

Drawback:
Lack of emotional heft
Flaws in the screenplay
The later portions

Analysis
“Tegimpu” (the dubbed version of “Thunivu”) begins like a heist thriller, as shown in the trailer. In fact, we get the impression that we are watching some episodes of the web series “Money Heist” at first. Ajith is portrayed as an anti-hero out to steal the money, and he makes the sequences entertaining with his cool swagger and screen presence.

The first half of the film moves at a breakneck pace, with no indication of what the plot is about. Ajith’s Michael Jackson dance moves and dialogues continue, possibly to entice his core fans.

The film shifts gears in the second half and reveals the hero’s true mission. We get to see a story similar to what Shankar did early in his career. The hero exposing bank frauds and demonstrating how people are duped in the name of various bank schemes is the main highlight of the second half. The basic message it conveys is positive.

However, it provides too much information, and the story feels jumbled in many places and drags on. The narration should have been clearer in this case. There is also no emotional connection. The backstory of Ajith and Manju Warrier is also unclear. It looks like something out of a gangster drama.

The later sections have a sense of déjà vu.

Overall, “Tegimpu” is a total mess up with no storyline, no emotion and no hitting factor. It failed by all means and the film remains as a big thumbs-down in Ajith’s career.