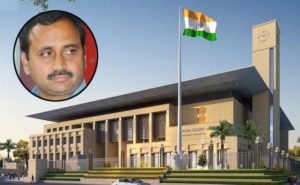 The newly-built cosy office of the Telugu Desam Party state headquarters at Mangalagiri, which was formally inaugurated by party president and former chief minister N Chandrababu Naidu on Friday landed in legal troubles.

YSR Congress party MLA from Mangalagiri Alla Ramakrishna Reddy filed a Public Interest Litigation (PIL) in High Court against the allotment of 3.6 acres of land for the construction of the TDP party central office.

He alleged that the allocated land was not in accordance with legal norms, he said in the PIL.

He argued that the permitted land of 3.65 acres of Vagu Poramboku land for 99 years lease at Atmakur village in Mangalagiri Mandal of Guntur district for the construction of TDP central office was illegal, arbitrary, unconstitutional.

Reddy said the land allotment was done in violation of the provisions of Andhra Pradesh Capital Region Development Authority Act, 2014.

The YSRC MLA requested the High Court to cancel the G.O. 228 issued on June 22, 2017 and also requested the HC to order the CRDA commissioner to demolish the illegal construction.