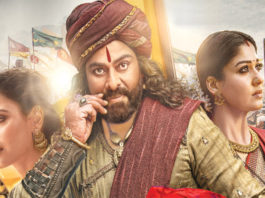 The wait is finally over.Megastar Chiranjeevi’s highly anticipated ambitious period drama Syeraa Narasimha Reddy is hitting the screens worldwide amid massive expectations.Let’s find out if SyeRaa lives up to the hype and hysteria or not.

The film is based on the Palegar of Rayalaseema , Majjari Narasimha Reddy, who revolted against the atrocities of British Raj in 1847. Narasimha was one of the 61 independent palegars of the region who is under Biritish system and pay taxes. The conflict begins when drought hits seema and the British still insist to pay tax on land. How Narasimha Reddy unites the rest of the palegars , people and revolt against the atrocities , is the rest of the story.

Director Surender Reddy opens the story on Jhansi Lakshmi Bai. To inspire her warriors , she narrates story of Uyyalawada Narasimha Reddy which happened 10 years prior to her time.

Sye Raa Narasimha Reddy has been executed on BIG scale , beginning with showcasing Britishers’ atrocities in the region. Narration is slow paced initially but that is adequate to build up the required emotion against the rulers. As interval approaches the film picks up the pace. The scene in which first time Narasimha Reddy revolts against Officer Jackson came out well , followed by a high intense Interval block. Director surender takes a cue from S.S.Rajamouli here.

Even though Megastar Chiranjeevi shows his age in few scenes, one has to appreciate his conviction and gumption to do this role. Given the age ( 30 years ) of the protagonist in the story , Producer Charan himself would have been T fit for this role. Nevertheless , performance wise chiranjeevi gave his best. His dialogue delivery is good.

Second half starts off with some cinematic elevations and works with masses for 30 minutes. Then onwards back to back fights between Britishers and Renadu area palegars come in sequence.

Most of the action sequences by Greg Powell, Lee Whittaker, Ram-Laxman and A Vijay are far from realisitc, but from mass point of view may be a necessity.

Cinematic liberty in historical films is acceptable , but higher degreee of distortion might not be. When did Narasimha Reddy and troops kill 10,000 British Army ? Killing of so many thousands of British troops would have highlighted Narasimha Reddy on world history books. In addition, the scale of war episodes are mounted as if two gigantic empires ( likes of Maratha Sivaji empire ) are at war.

Factually Narasimha Reddy was hardly a leader for 4-5 Taluks , who majorly performed guerilla warfare. Here we’re not undermining the patriotism of the person, but highlighting the way it has been portrayed and played to galleries.

Another fact is Narasimha’s wife Siddhamma passed away before he was captured by Brits. But , in film she was shown alive when Narasimha was caught.

An emotional climax works, but it is coupled with unnecessary mass heroism shots.

Frontline stars , actors from all languages have been roped in. Amitab Bachan as Gosai Venkanna , Kicha Sudeep as Avuku Raju , Vijay Sethupati , Jagapathi Babu as Veera Reddy , Nayanatara as Siddhamma ( Narasimha’s wife ) , Thamanna as performer and many others fill the cast and everyone did their job best. Megastar Chiranjeevi as mentioned above, except for his looks , did a good work as protagonist. His dialogue delivery is very good.

Sye Raa has long been a dream project for Megastar and after watching the movie one can understand why. It is a story of an inspiring freedom fighter with good emotional content. A commercial hit film that portrays rebellion Narasimha Reddy story effectively. Producer Charan delivers a dream project for his dad with ample help from Director Surender Reddy.