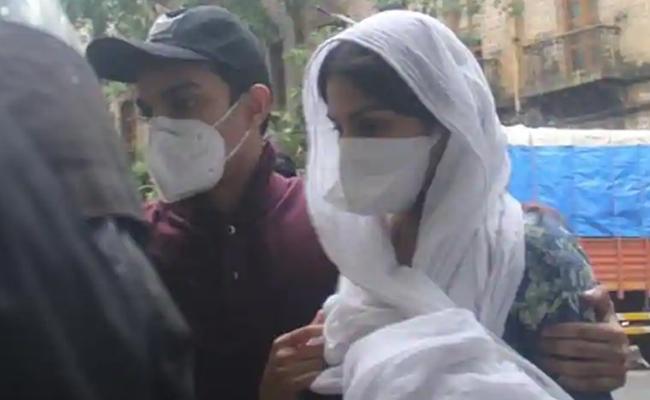 The Enforcement Directorate (ED) has prepared a set of questions for actor Rhea Chakraborty and her family members in connection with the death of Bollywood star Sushant Singh Rajput which can spell trouble for the lot.

According to top ED officials, the probe agency has prepared a set of over 20 questions related to the financial transactions from the bank account of late actor, who was found dead on June 14 in his Bandra flat.

Rhea along with her brother Showik Chakraborty reached the ED office in Mumbai just before Friday noon, after the agency refused her request to postpone the questioning. Their queries will include details of moveable and immoveable properties, businesses, companies in which Rhea and her family members are stakeholders.

The official requesting anonymity said that the ED will first ask Rhea to furnish the details of her address, profession, family members, mode of income, details of bank accounts, credit cards.

The source said that the ED will also seek the Income Tax Return (ITR) details of Rhea. He said Rhea will be questioned about the details of her properties including moveable and immoveable assets. They would like to know about two properties bought in Mumbai.

Rhea will be asked on whose name were these properties bought and from where the money was arranged to buy them.

The ED will seek the details if there was any will of inheritance left behind by Sushant, and whether she was also in touch with the family members of the late actor.

The source said that the ED will also seek the details of the income of her family members and if any of the members are dependent on her.

Rhea will be asked to submit the details of her bank statements and amount of money received from other bank accounts and if any transactions happened from Sushant’s Kotak Mahindra bank account as alleged by his father K.K. Singh in his complaint to Patna Police on July 25.

Sushan’t father in his complaint to Bihar Police has alleged that from Kotak Mahindra Bank account of his son which had Rs 17 crore, a total of Rs 15 crore was withdrawn or transferred.

The ED has registered a case under the Prevention of Money Laundering Act against Rhea and her family members on the basis of the complaint of Singh submitted at the Rajiv Nagar police station in Patna.

The ED will also ask the details of the financial transactions of the two companies in which she and her brother were directors along with Sushant.

According to the source, in Vividrage Rhealityx, Rhea is a director and in Front India For World her brother Showik is a director. The ED will seek the details of the kind of business of the two companies and the financial health and transactions of these companies.

The ED will also probe if Rhea and her family members invested the amount in any foreign countries.

On Thursday evening, the CBI has also taken over the probe against Rhea and her family members and others on the recommendation from the central government after the Bihar government requested for the central agency probe.

Sushant and Rhea were in a relationship before the actor’s death. Sushant’s father has levelled various allegations against Rhea, including taking money from his son and also threatening to disclose his medical reports to the media. Sushant’s family has also accused her of keeping him away from his family.