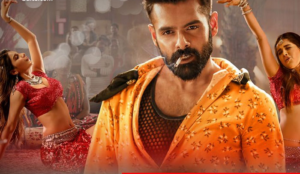 Like we said umpteen times already, one of the primary reasons behind the super success of Ram and Puri Jagan’s Ismart Shankar is none other than the glamour show poured by heroines. Both Nidhi Agerwal and Nabha Natesh competed with each other in spicing up the silver screen with their oozing sex appeal.

There are repeat audiences for the movie in theatres due to the x-factor created by the songs of the movie. And the mass song ‘Dimak Kharaab’ which has the catchy ‘Jilelamma Jitta’ lyrics went viral due to the ravishing treat given by the two heroines together. From a time, cinema lovers are actually waiting to see that video on YouTube.

Usually, the video songs are being released much before the film’s release itself. But understanding the potential this song has, the makers (or the digital rights owners) have delayed it big time. And finally, giving relief to glamour lovers and desiring enthusiasts, the video song of the film is out. Already youths have started feasting on it.

Enjoy the song folks and if we have to say it in Puri Jagan’s style- “Maar Muntha, Chod Chintha”