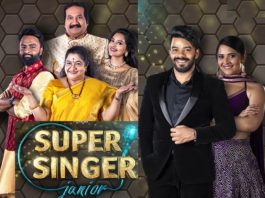 As announced, the lyrical video of ‘Naa Peru Seesa’ from Mass Maharaj Ravi Teja’s upcoming action entertainer ‘Ramarao On Duty’ is out now. While the two songs which came out till date were melodies, the third one is a complete mass number that oozes glamour and energy.

Sung amazingly by seasoned singer Shreya Ghoshal, this song is written by Chandrabose. Sam CS came out with a teasing tune filled with earthy beats. The visuals look colorful and the making shots showcase that the team had a great time filming it. Anveshi Jain raised the mercury levels with her glamour and steamy dance moves. The song is definitely impressive and has all the qualities to become a hit.

‘Ramarao On Duty’ is all set to release on 29th July and the complete video song is going to be a feast for the audience in theatres. The cast of the film involves Venu Thottempudi, Nasser, Sr Naresh, Pavitra Lokesh, ‘Sarpatta’ John Vijay, Chaitanya Krishna, Tanikella Bharani, Rahul Rama Krishna, Eerojullo Sree, Madhu Sudan Rao, Surekha Vani and more. Rajisha Vijayan and Divyansha Koushil are the female leads in this project.

Sam CS composed the music for this film while Sathyan Sooryan is the director of photography. Praveen KL is the editor and this story is written from true incidents. This movie produced under Sudhakar Cherukuri’s SLV Cinemas LLP and RT Teamworks is directed by debutant Sharath Mandava. Ravi Teja will be seen as a Deputy Collector Mandal Revenue Officer in his 68th film.

Future Of These 2 Remakes Left In Dilemma!