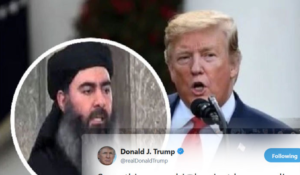 The United States military has carried a secret operation in which Islamic State leader (ISIS) chief Abu Bakr al-Baghdadi is reportedly killed. The US military held this raid in the northwest of Syria after the special forces received a proper information their intelligence sources.

The 48 year old became the leader of Islamic State of Iraq (ISI) in 2010 and he has been hiding for the last five years. Earlier this year, the ISIS sympathizers released a video of Baghdadi addressing a gathering in at the Great Mosque in Mosul and since then the US military is on the run for him.

US President Donald Trump acknowledged Baghdadi’s death by tweeting, “Something very big just happened.” However, Trump did not delve in further details while the Pentagon sources stayed away to comment on this.

This is the second major victory for the US military. When Obama was the President, Osama Bin Laden was killed in the year 2011. This helped Obama to get elected as President for the second time. The same might repeat as Trump is seeking second term.