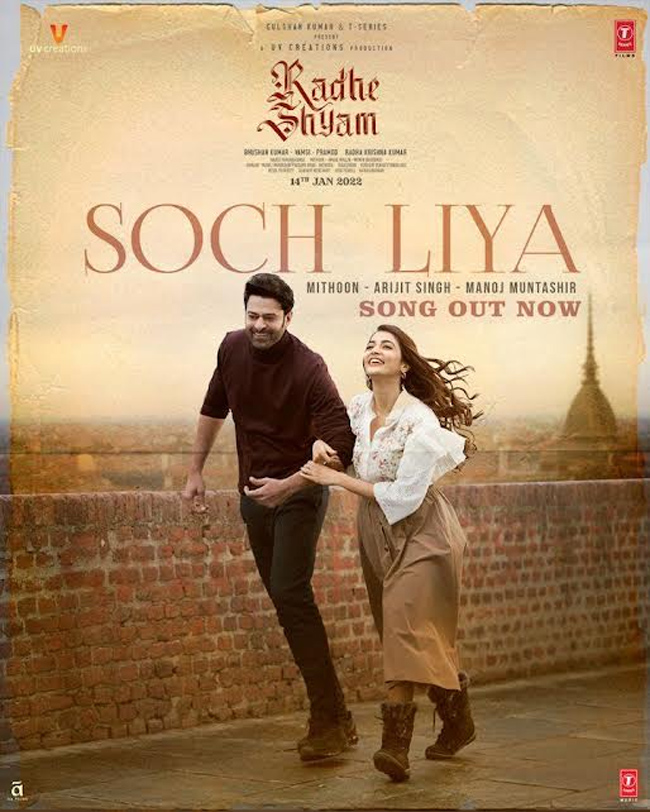 Keeping up with the trend of releasing the Hindi version’s songs before Telugu, the team of ‘Radhe Shyam’ have released the second song titled ‘Soch Liya’. It is a completely emotional song that shows the pain of heartbreak between the pair Prabhas and Pooja Hegde. This interesting love story is raising expectations with each and every update.

While the first song showcased the blossoming love between Vikram Aditya and Prerna, ‘Soch Liya’ explored the pain of love. It is a complete Bollywood number sung beautifully by star singer Arijit Singh while it was composed and arranged by Mithoon. The visuals are absolutely beautiful in this song and grandeur is sure to take breathe of the audiences away. Prabhas is looking handsome as usual and his dressing sense deserves a special mention. Pooja Hegde is spectacular and their chemistry is visible on the screen. There has been a lot of criticism over Prabhas’ looks lately and it seems like the makers have taken extra care regarding his styling and makeup. Movie buffs are eager to see what the team of ‘Radhe Shyam’ has in store for us.

Fans are loving this song and it is getting a very good response even though the local audience are a bit upset with the Hindi version taking the front seat. ‘Radhe Shyam’ is getting released on 14th January 2022. UV Creations and T-Series have bankrolled this film jointly while Radha Krishna Kumar has directed this special love story. Manoj Paramahamsa is the cinematographer while Kotagiri Venkateswara Rao is the editor. Justin Prabhakaran is the music composer for South Indian languages. This is Prabhas’ first romantic film after ‘Darling’ and ‘Mr. Perfect. The expectations are quite high on it. Other than this, Prabhas is working on ‘Salaar’ under Prasanth Neel’s direction. This is a huge action film while he is also working on a mythological drama named ‘Adipurush’ which is directed by Om Raut. Kriti Sanon is the heroine while Saif Ali Khan is the villain in this project. He even kickstarted Nag Ashwin’s high-budget time travelling project. Deepika Padukone is the heroine in this film while Amitabh Bachchan plays a key role.